The one about the rough sea and a little girl not feeling too good .....

This is the first time Aimee understands about going to Ireland and she has being so excited for the last week, constantly asking when are we going, and we have to count out the days. We marked the day on her calendar so she could mark them off herself, so then I got "5 more days, four more days, etc. I didn't think she would sleep Sunday night but she did! On Monday morning at 1:00 am we set out for Holyhead to take the 3hour ferry to Ireland. The girls slept all the way, I slept some of the way. We arrived at the Ferry port at about 5:00 am. The girls woke to go to the toilet and then went to sleep until we were due to board. We found some seats, Chloe went straight back to sleep, but Steve, Aimee and I were hungry, so we went to have breakfast. We went back to our seats, Steve went to sleep, I read some of my book (I am re-reading the Twilight series, getting ready for the next movie, lol) and Aimee played on her DS. All was well until the sea got rough and Aimee piped up "Mummy I'm not feeling so good", I told her to try and get some sleep, she laid down but then said it was worse. So I said do you want to go out on deck, she immediately agreed. So we stayed out on deck and she enjoyed it. 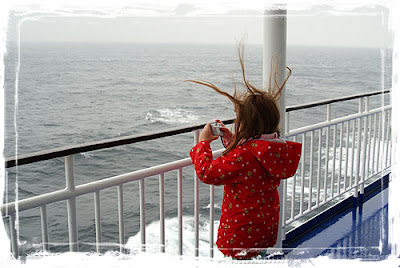 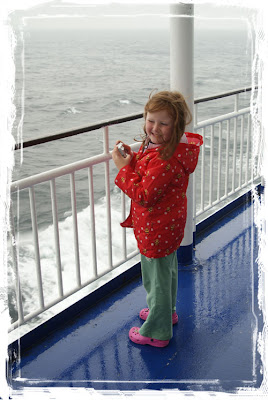 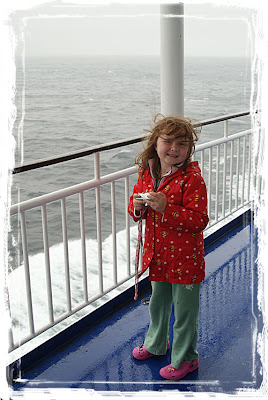 We headed back inside to go to the toilet, and discovered that a magic show was about to begin. So we decided to stay and watch, luckily this also took Aimee's mind off her not feeling too good.

About 15 mins into the show, he wanted a volunteer, so of course Aimee wanted to do it. She crossed her legs (we were sitting on the floor, to stop us from falling, lol the rest of the audience decided to join us), put a big smile on her face and held up her hand. He picked her .... 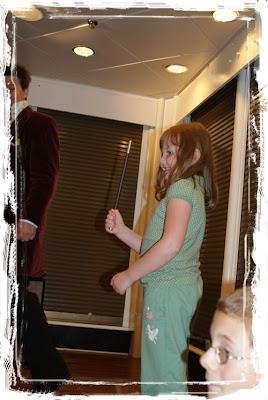 This is the trick of the magic wand going all floppy, he passed the wand to Aimee and asked to hold it straight, whatever way Aimee held the wand it stayed upright, the magician looked at me and I just shrugged my shoulders. 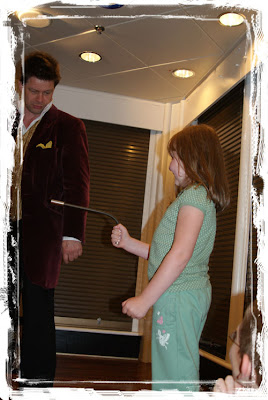 He fixed the wand so now it flopped! 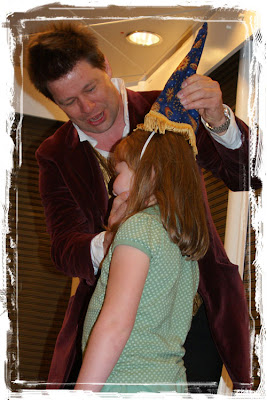 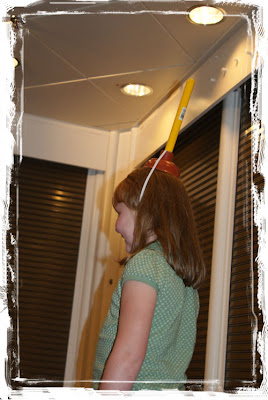 Once Aimee discovered what was on her head she was not impressed, lol 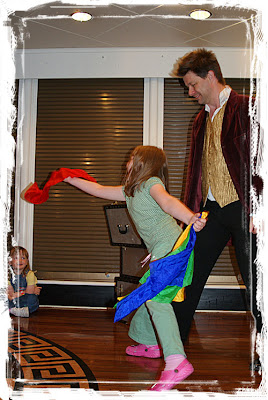 This is the one where he had lots of different scarfs, every time he pulled one out of his pocket he asked Aimee to hold it and not let it drop, Aimee let the first two drop and then caught all the rest, he even tried to move the red one around but she still managed to catch it. 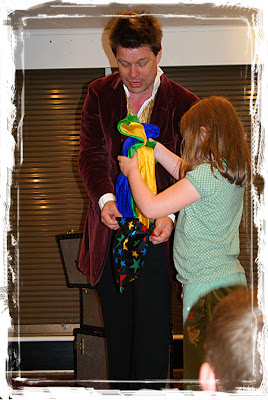 Voila la, all the scarfs into one, Aimee was quite impressed when she saw this!
He then thanked Aimee and asked her type of balloon animal she would like, she answered a rabbit, so he set to and started making one, as he went on he said, the thing about this rabbit is he is going to a fancy dress party and he is dressed as a dog!!!!! 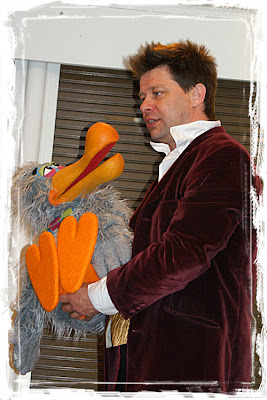 He took his friend Squawk out and preceded to have some fun with the kids. 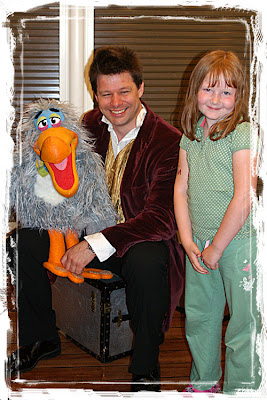 At the end of the show I asked if he would pose for a photo, and he very kindly did, I am sorry to say I never got his name! One the way back to England on the ferry they had a children's room instead of a magician, ah well! 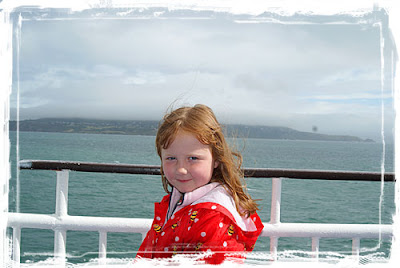 I brought Aimee back out on deck when I noticed we were nearing Ireland, and these are photos of her with Ireland in the background! 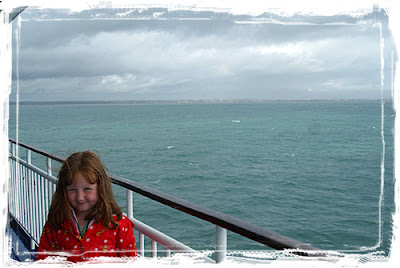 BTW the beautiful frames that I have around my photos (decided to update these too) can be found on Kristine's blog Lost in Creativity. She designed the frames herself and calls them Grunge Frames, so if you are lazy like me and didn't want to design your own, pop over to Kristine's place, she gives fantastic tutorials on how to use the frames. She also gives tutorials on doing different things in photo shop, so her blog is definitely worth a look, she is also a fantastic crafter!

I have been in Ireland for the last week and a half, ... had a fantastic time, loved every minute, sad to be coming back to England to be honest, but unfortunately the price of living is still very high!

Arrived home at 4:00 am on Wednesday morning, did absolutely nothing Thursday and have spent Friday washing, washing and more washing (mums machine went on the blink, bleeding typical)

I just brought my fav stamps, water brush, distress inks and watercolour pad! I just stamped and coloured, so nothing to share on the crafting front! But I will have lots to share on the photo side in the next few days!

So tonight I have done what I have being meaning to do for weeks, update my blog!!! I am not too sure as yet, and would appreciate any comments any one has to share, bad or good!!!

Watch this space, some of my first photos will be of my (nearly) SIL engagement ring!!!!

OOH had a quick look at some blogs tonight as things were loading up on my blog and I noticed that Bev is giving away the most fantasic candy (she has reached over 400, 000 hits and 1274 followers, wow) you will be silly if you don't go and look! 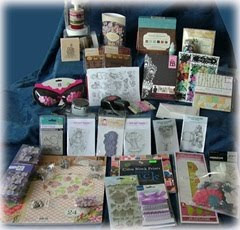 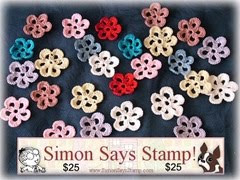 Go here to be in with a chance!
TFL
xxxx
Posted by Helena at 12:42:00 am 3 comments:
Email ThisBlogThis!Share to TwitterShare to FacebookShare to Pinterest
Labels: Blog Candy, ireland
Newer Posts Older Posts Home
Subscribe to: Posts (Atom)